Imagine the joy of hot buns wrapped in a linen cloth served with fresh butter on a table surrounded by friends and goblets of red wine.

Now imagine the comfort of flaxseed sprinkled on your morning oats.

What do these two scenes have in common?  That's right, they come from your garden.  Flax, the very same plant that gives us flaxseed, also makes linen cloth.  Easier to grow than tomatoes, less work than carrots, and more versatile than eggplant.

Flax gives us two harvests from one plant.  The seeds and the cloth - and yes, you can get both from the same harvest no matter what They tell you.  How do I know this?  Because I've been obsessing about flax for years and decided to find out what is really possible and what bits of advice are just superstition. 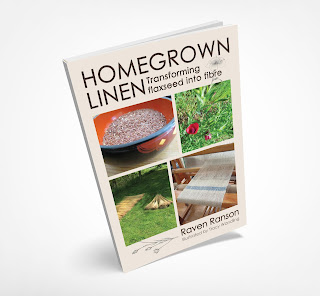 Spoiler alert: most of it is superstition.

Flax is way more versatile than it looks.  You can get cloth from seed flax and you can get delicious seed from fibre flax.

So now you know what I've been up to all these months.  A crazy adventure writing and creating a book.

There are a few days left on my Kickstarter where you can pre-order the book Homegrown Linen: transforming flaxseed into fibre at a discount.

We are hoping to have it available in stores in February.

If you want to order a book or carry the book in your store, you can find me at:

Posted by TrampledbyGeese at 11:38 No comments:

Email ThisBlogThis!Share to TwitterShare to FacebookShare to Pinterest
Labels: flax

Inspired by this recipe, I decided to try making my own falafels. 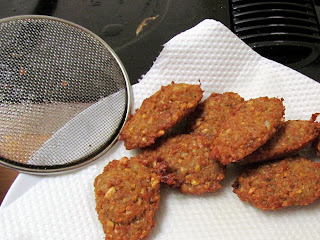 I made a few changes, as usual.  On the whole, a resounding success. 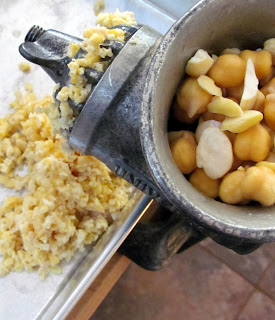 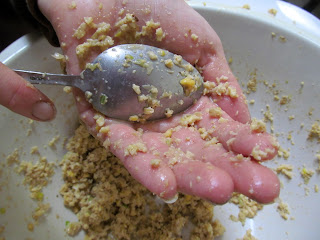 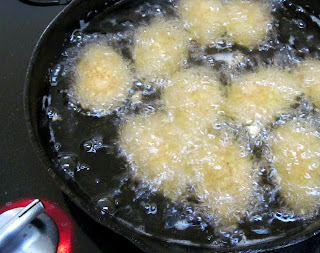 Affordable?  Yep.  I can buy three falafels for a dollar in the shop, or I can make this huge pile of falafels for the same amount.
Posted by TrampledbyGeese at 15:16 No comments: 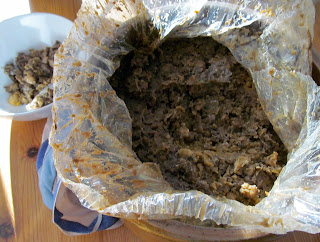 We began by opening last years Chickpea mugi (barley) miso.  It had an intense rich smell, and a robust miso taste.  The colour was much darker than I expected and we failed to get all the air pockets out, so there were a few spots of mold inside.  But otherwise a success.

This year is two batches of red miso.  We used the same recipe for both, only the beans were different.  For both, we used frozen koji rice from the local Japanese food store. 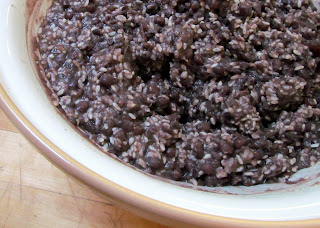 As with last year, we relied heavily on Sandor Katz books, Wild Fermentation and The Art of Fermentation, for our miso recipe.  For a more in depth instruction on how to make miso, please see Katz.

That's not too shabby, especially when you consider we shared the expensive $25 between all the miso club members.

Anyone who says you can't eat healthy on a budget hasn't made miso.

Posted by TrampledbyGeese at 11:41 No comments:

Just writing this here before I forget.  Made it this morning with all the things I thought would be good for healing a cold.  Recipe by intuition.  Very tasty.

Mung beans
ghee
Garlic - add lots of garlic, then add a couple cloves more
green chili pepper (finely chopped)
cumin
turmeric - not too much or it overpowers the dish
salt

Posted by TrampledbyGeese at 12:59 No comments:

Email ThisBlogThis!Share to TwitterShare to FacebookShare to Pinterest
Labels: Soup

No photos today, just a quick recipe before I forget how to make this amazing condiment.

A couple of weeks ago, a branch from an apple tree broke because the apples on it were too heavy.  Unfortunately, the apples weren't ripe yet.  Then I remembered about this Victorian recipe I read for mango chutney, only it didn't have a single mango in it.  Instead, it had unripe apples.  Perfect!

Based loosely on recipe 392 of Mrs Beeton's Book of Household Management, I had to make a few changes.  I have a tender place in my heart for anyone who applies garlic by the quarter pound, I must admit that some of the other ingredient quantities were a bit unusual to the modern taste.  So changes were made to method and quantities but without Mrs B's little book, I wouldn't have thought to make such a scrummy chutney.

Here's a little note that Mrs Beeton gives regarding her version of the recipe:

This recipe was given by a native to an English Lady, who had long been a resident in India, and who, since her return to her native country, has become quite celebrated amongst her friends for the excellence of this Eastern relish.

All ingredients are approximate


Affordable: Apples would have gone to waste as they fell off the tree far too early to ripen on their own.  Onions are from the garden.  That leaves the spices, raisins and sugar - so... totally guessing, let's pretend it's about $2 for this.  It made 6 and a half 8 oz jars full, which makes it 30 cents per jar.  This tastes almost identical to an English apple chutney I bought from the store once upon a time, which cost $8 for the same size.  That's a savings of $7.70 cents.  NICE!

To make it Vegan Friendly, you need to replace the sugar with a vegan friendly sweetener, and to be careful not to harm any worms that are probably living in your apples, thus causing them to fall before they were fully ripe.

Posted by TrampledbyGeese at 19:11 No comments: