For the holidays I received this wonderful book called In the Charcuterie by Taylor Boetticher and Toponia Miller.  It's full of beautiful photos and well worth a gander.  Most of the book is about working with fresh meat, how to create beautiful finished dishes like roasts and instruction on how to debone and create different cuts of meat from a carcass.

The section on curing sausages is short but empowering.  The authors give a general recipe on how it's done, including different casing sizes, drying environments and all the necessary and sufficient conditions to be a success.  For example, lamb casings or thin hog casings are more forgiving and don't need as specific an environment to ferment and dry in than great big fat bung casings.  Which means, that if I turn the heat off in my room for two weeks, in the middle of winter, I can cure and dry my own sausages.

I followed the recipe for pepperoni except that I used smaller hog casings and changed the drying time/conditions accordingly.  But this book is friendly towards that kind of change.  Basically they take the attitude that people have been curing sausage like this for a few thousand years, without refrigeration or fancy electrical curing chambers. What's more, they didn't have shops to buy specific fermenting cultures from, instead they used things like a splash of wine in the mix.  This stance is quite different from the usual 'you must do this specifically and buy all this fancy stuff, or everyone dies' approach to curing meat.

Feeling empowered by the book, I gathered together my spices, curing salt, and garlic.  I used 7 lb of old goat, 1 lb of pork and 2 pounds of pork fat. 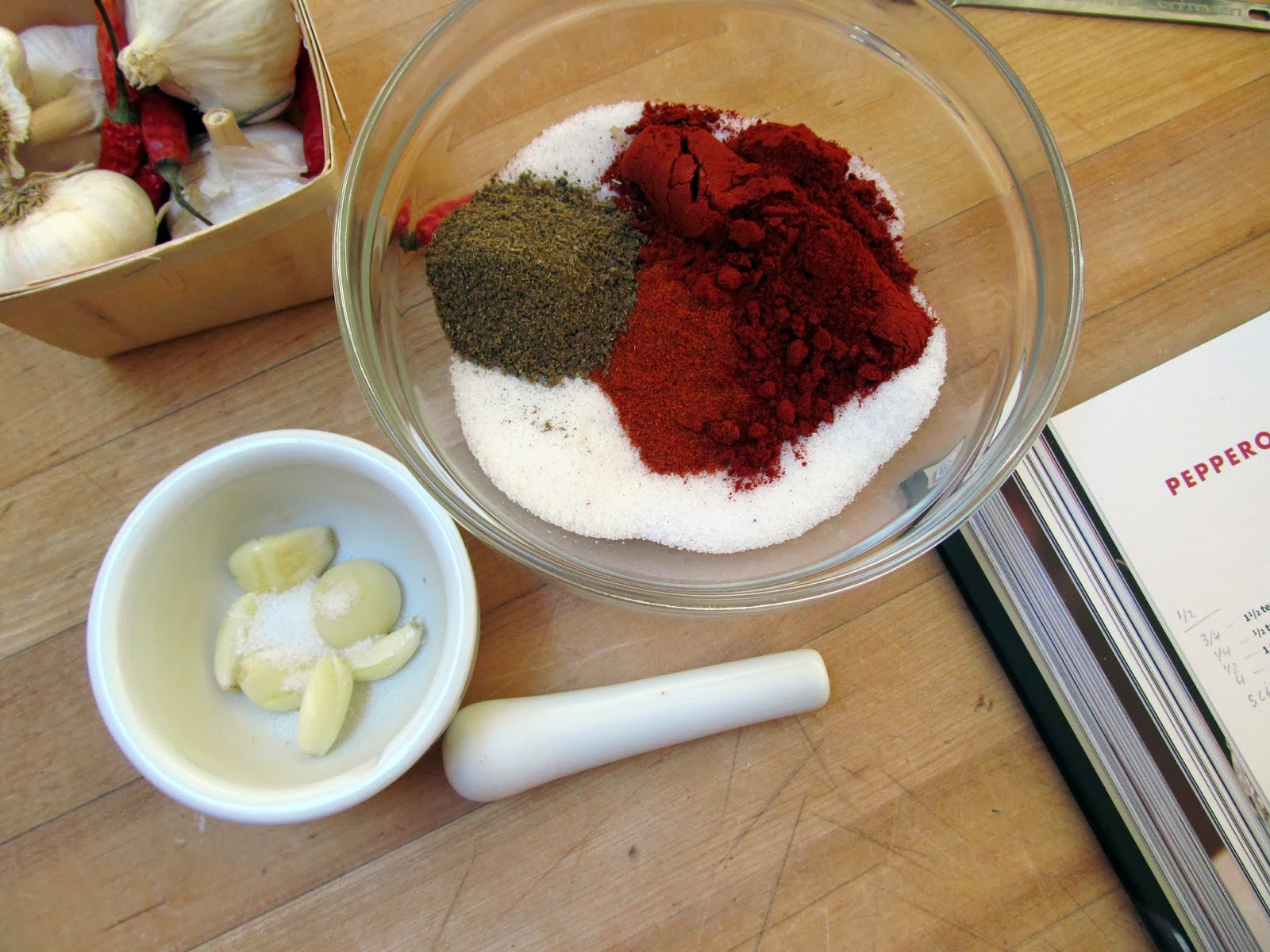 Mixed it in with the cubes of meat and stuck in the fridge overnight. 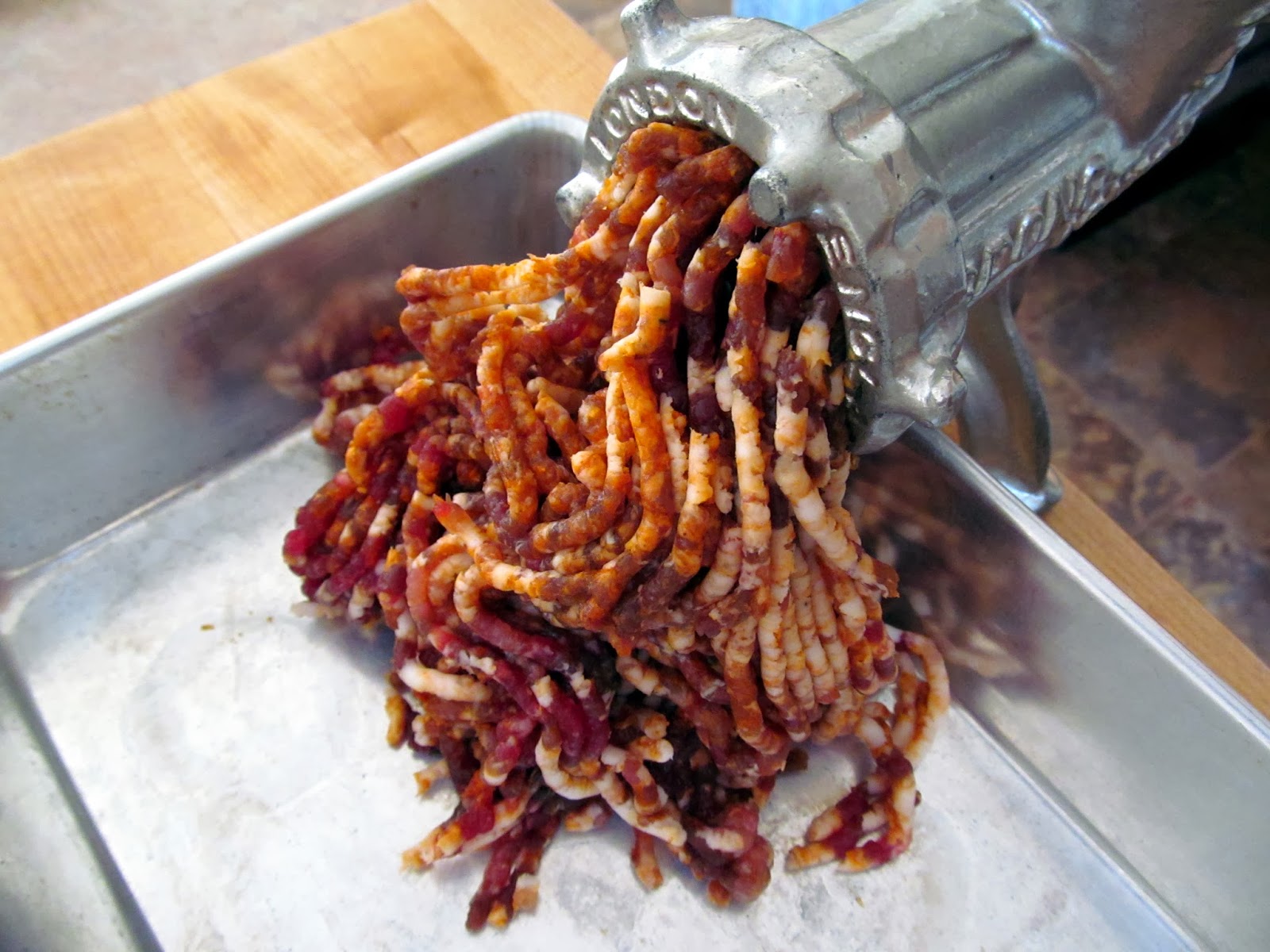 I have this antique meat grinder that I found at a yard sale, so I thought I would give it a try.  It works marvelously well, just like the books say they should.  When I tried my modern grinder that I bought from BigBoxMart (I'm not proud of that), I could see that all the problem's I've had making sausages in the past were not me, it was the tool being completely useless.  This made me giddy with joy to have a meat grinder that works effortlessly, although, it was a bit small and can only process 1 tablespoon at a time - I am going to keep an eye out this year for a much larger one.


After stuffing the sausages, making sure all the air is removed (both of which I need more practice with as I'll show you later), then it's time to hang them to dry.  Ideally the temperature will be between 65 and 70F, and be constant for the two weeks.  I choose 68 degrees because, well it's cold enough thank you.  Each room has a thermostat so it was easy to keep my room a steady temp.  As the humidity was dry that week, I lightly misted the sausages with fresh water a few times a day for the first three days.

I was a bit disappointed because none of the friendly white mould formed on the outside of the sausages.  This mould is suppose to help keep things safe and prevent bad microbes from settling in.  Next time I think I'll pick up a piece of sausage from the local Salumeria and put it in the same room as my hanging sausage, the mould should migrate just fine.

After a week, we started testing them, yummy, but still a bit raw texture in the middle.  Left them another week, and much better. 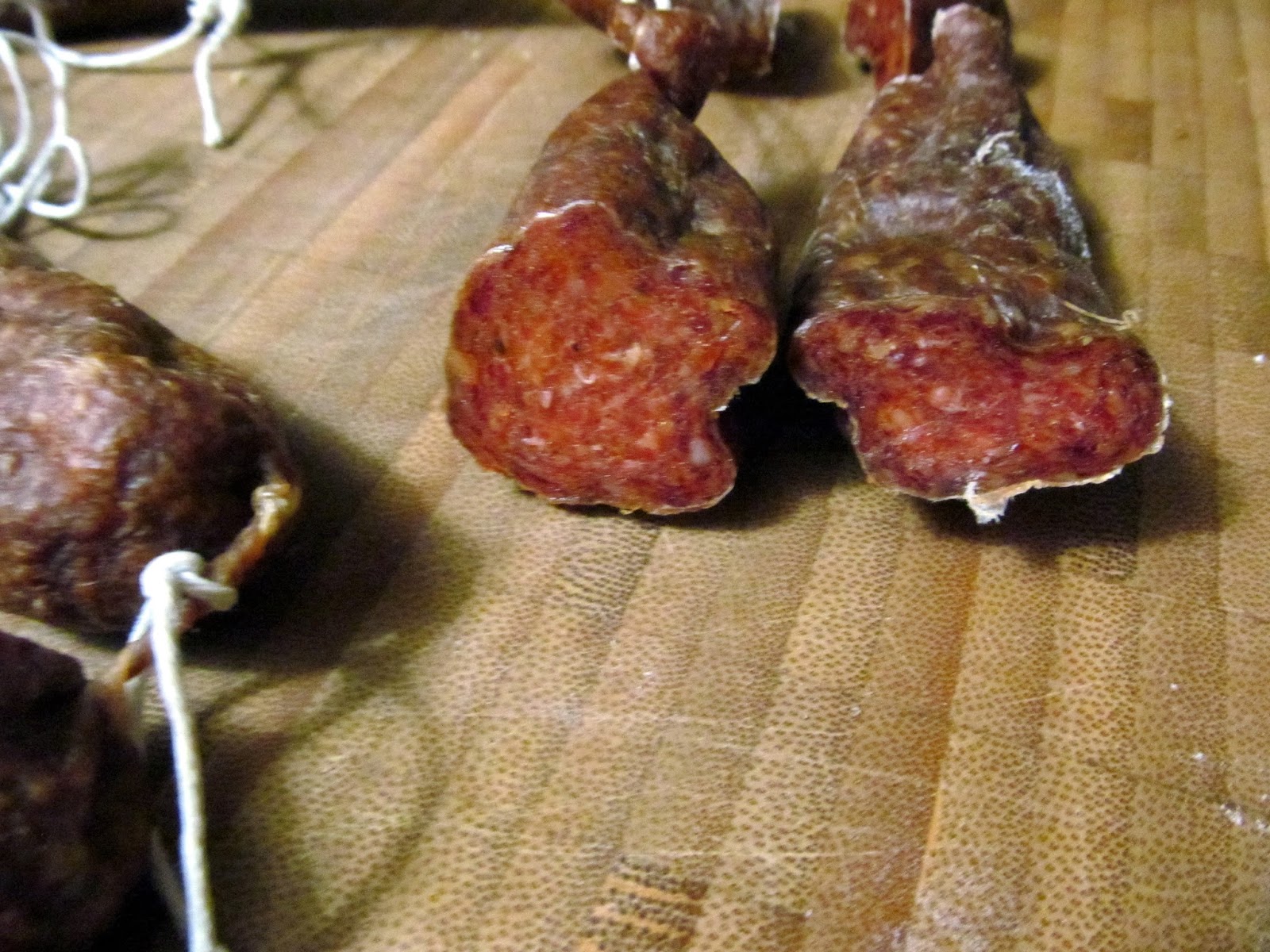 Look how beautiful and red that meat is.  This tastes amazing! 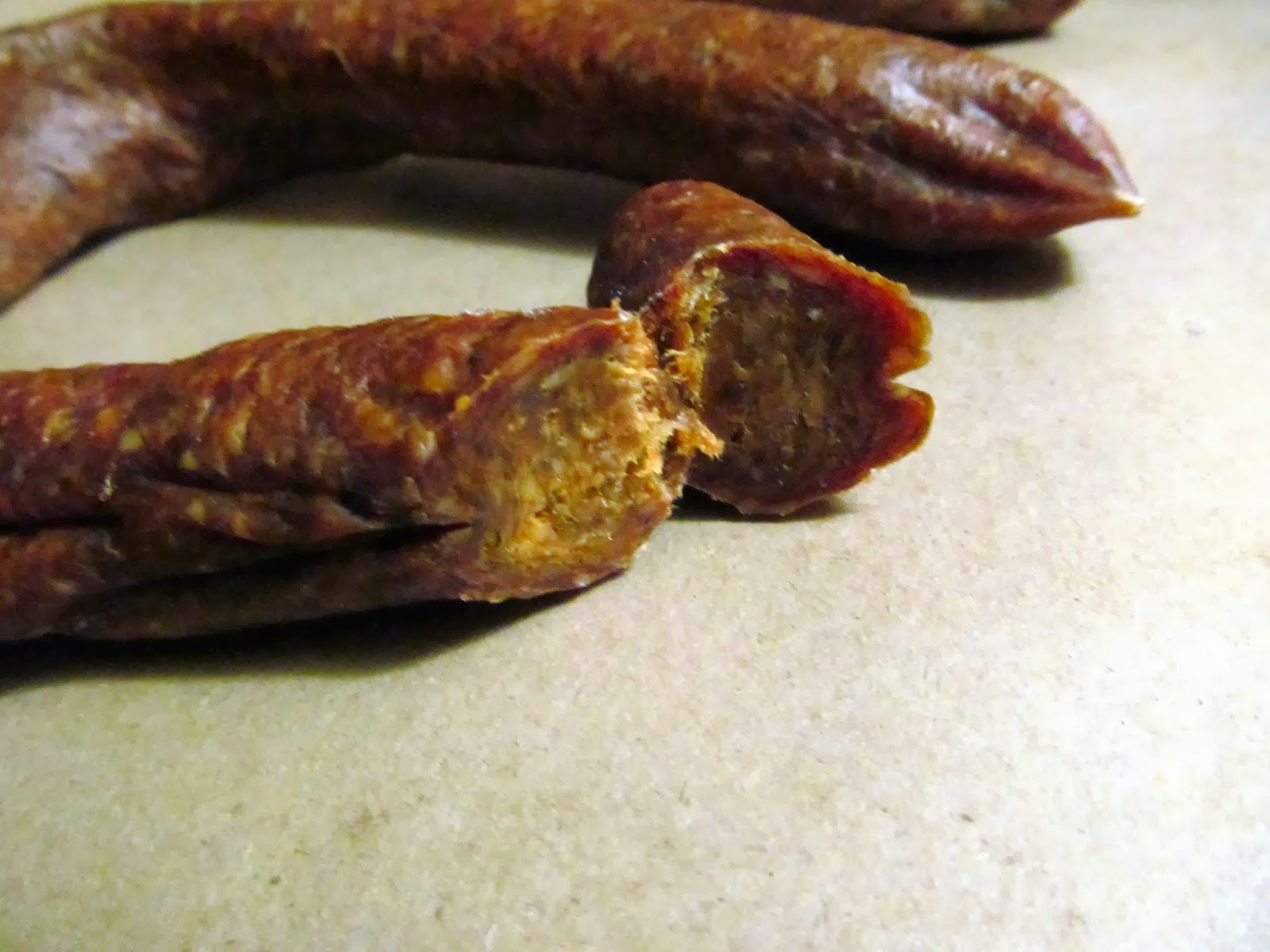 Sort of yellow/brown inside.  Not appetizing at all.  Though they smell okay, I'm not happy with them, so they get tossed out.  I don't know why they look like this, but I have suspicions.  Maybe, I didn't get all the air out of the casings - I admit, I did have problems with this - or stuff them full enough.  Or possibly the outside casings dried too quickly leaving the moisture inside to rot the meat instead of fermenting and drying it.  I don't think this second one is what happened because I would expect a bad meat smell, where there is no real change in smell from lovely red insides and ugly brown ones.  Only about a quarter of them turned ugly, so three quarters good, that's great for a first attempt.

What I've learned from ugly brown insides is that I need more practice making cured sausage.  How exciting.  I wonder what flavour to make next.

Cooking with Allergies:  There is a lot of room to adjust for allergies when making your own sausage.  If you have problems with meat and mould, this is probably not the recipe for you.  However, spices, wine and other allergies issues can easily be accommodated.  In the book there is a recipe for your basic cured sausage with specifies the ratios of meat, salt, curing salt and fat.  Page 232 gives you everything you need to know about this, and you can play with your spices and herbs from there.

The recipes in this book do not include commercial starter or filler which can be a source of allergies.  HOWEVER, it does include nitrates (curing salt #2).  Some people are sensitive to this.  There isn't any mention on not using curing salts (nitrates/nitrites).  From the research I've done, omitting nitrates/nitrites from whole muscle cured meats like bacon is possible, just increases the risk of spoilage. However, omitting it from dried sausages is not a good idea for a person with a Western immune system.  If you want to omit the curing salt #2 from your dried and cured sausages, do your research first!  And know that in the West our bodies are no longer trained to handle a strong bacterial load (both good and bad).

Affordable?  Pork cost about $3 a pound, pork fat $1, the goat roughly $4 a pound.  The goat was old and angry, so the meat isn't much good for roasting or much else.  This used all the little scraps of meat that would often go to waste in butchery.  That's about 7 percent of hanging weight that would usually be lost.  So do we count the cost of the goat since it's salvaged material?  I think I will because it makes a fair comparison for later on when I run out of angry goat.

Meat was $33, but it was (mostly) grown on the farm and raised organically.  Spices, garlic, wine, casings, let's round it up to $2.  Take into account that although I started with 10 lbs of sausages, they lose about 30% of their weight so I ended with 7lbs.

$35 for 7 lbs of artisan cured sausage that I know exactly what went into it, is $5 a pound.  I don't think that's bad at all, though I can't remember off the top of my head what the going rate is in the shops, but I wouldn't be surprised to pay between 2 to 4 dollars an oz for artisan sausage.

Then again, I do need to knock off a quarter of the finished amount for my learning mistakes.  So really, this batch was almost $7 a pound.  But I expect to get better at this and have less waste in future.

Healthy?  Yes.  In small amounts.  There are some medical studies kicking about these days that say you should have less than 1 oz of cured meats a day.  I suppose if you are on a fully Western diet full of wonderfully creative preservatives and manufactured salts like MSG, adding cured meats to your diet would increase the stress that salt puts on your body.

However, that said, people have been eating this sort of sausage for several thousand years, and up until the last 120 years or so, the amount of salt used, and nitrate/nitrites used were considerably higher.  This kind of food was a staple in the diet, and the diseases attributed to cured meats only started appearing in the last hundred years.   My interpretation of this is that perhaps cured meats is simply a scape goat for a greater problem in the Western diet.

But even still, the flavour of this is so intense, it makes a better condiment than main dish.  I know everything that went into my sausage, so compared to big factory made peperoni, I feel this is healthier.

Safety?  Since I have no artificial colours or aesthetic ingredients added to the meat, I can tell right away if there is something wrong with the appearance or smell.  Because they are made in small batches, it is easy to do quality control.  Though large scale, factory production of cured meats don't fulfill these conditions, they are usually safe.  But when they go wrong, they go wrong on a big scale.  There has been a few issues with cured meat production in Canada over the last few years, with deaths.  I feel safer doing things at home, however, I arm myself with the knowledge needed to create safe food.
Posted by TrampledbyGeese at 09:38