The Quest for Bacon - Making Bacon at Home, Charcuterie Style.

My first attempt at making bacon at home turned out rather tasty.  It may not be the perfect rasher, but it is most certainly bacon.

I used the recipe from Charcuterie by Ruhlman and Polcyn

You mix up a basic curing salt (sugar, salt, and pink salt) and coat the pork belly with the mix.  If you want a flavoured bacon, it's a good time to add the pepper or maple sugar.  Put the meat in a ziplock bag and keep it in the fridge for about a week.  Massage the juices that come out of the meat around the outside of the meat every day.  And that is how you cure the bacon.

Next you rinse it off, and if possible dry it for a few hours uncovered in the fridge.  Then pop it in the smoker.

I really wanted to use this smoker, an electric one that takes hardly any wood chips to make the smoke, but it's not working at the moment.  so, I got out the old BBQ smoker. 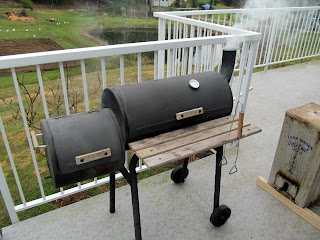 After about 3 hours, I still couldn't get the internal temp of the bacon to what the book said.  So I finished it off in the oven. 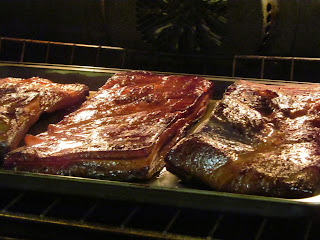 On the whole, I'm impressed with the fact that I made bacon.  It' tastes, um bacony.  It's over smoked and I cured it too long, so a bit salty.  But it is enough of a success to try again and soon.

Price wise, it's a bit less than the normal bacon I buy from the speciality butcher, but more than commercial bacon (which I never buy).  The problem is I didn't get the pork belly on sale or at the right time of year.  So that's something I need to work on.

The thing I like best about this is that I know exactly what went into making it.  Now, when the world comes to an end with the zombies or whatnots, I know I can survive, because I can make my own bacon.

.  But I plan to make more, and play around with some other recipes.  When I come up with one that's truly mine, then I'll be sure to share it with you.