Now my Viili has well and truly curdled.  It no longer smells like yoghurt and is starting to sour.  When I touch it with my finger, a long gooey strand comes away with it, but for the most part, it's just like curdled cream - still pourable, not set at all.  The taste is like sour milk with a strong chalky aftertaste.  Not nice at all. 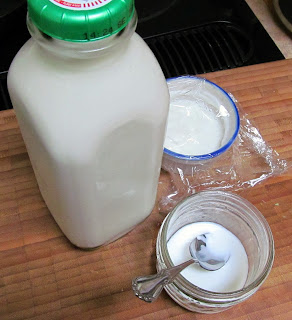 I read in The Art of Fermentation, and the people of Wells of Health confirmed, that when the yoghurt curdles it means that it has cultured too long.  The advice Wells of Health people gave is to put it in the fridge (keeping the cotton ball in the culture) for 6 hours, then remove the ball and take a bit of the thickest part of the curdled yoghurt and use that to culture a new batch.

I thought that maybe there was something wrong with the milk I chose for the first batch, so I went to the shop in order to buy some organic whole milk.  But when I was there, they had something called cereal cream on sale (it expires in a few days, thus the sale).  It's organic, and what's more it comes in this fantastic glass bottle!  I had a taste, and it's yummy stuff.

Not certain how this cereal cream is made, but it's one of the few cows milk products I've tried that doesn't upset my stomach.  It's strange that only organic cows milk (and not all of it) sits well with me.  This leads me to wonder if it's something in the diet or medication they give the cattle that I'm reacting to, and not the milk itself.  These days I also react badly to beef, most beef, but not all of it... something to wonder about anyway.

I have two cups of cereal cream left, so I will have to find something else to make with this today.  I wonder if I can make butter from it?  However, if it works as yoghurt, I may not have any of it left to experiment with.