Read on for a collection of soy-free-soy-sauce (soy-sub) recipes.  Most of them are quick and simple to use and do more than simply imitate the flavour of soy.  This list is constantly growing, so check back from time to time.

I have what is called a latent onset allergy to soy, which means basically one day I couldn't eat soy any more.  I found it literally depressing at the time, especially since Japanese food is my all time favourite, but now a days I've become quite use to it.

When I started reading ingredients, I discovered that cinnamon can often have soy in it as an anti-caking agent.  Raisins are often coated with oil to stop them squashing together, and guess what, 9 time out of 10 the raisins in the local supermarket include soy.  Chocolate is a huge one for containing soy as it stabilizes the chocolate and makes it less subject to changing in warm conditions.

Manufactures of ready made food products often change their recipe and sometimes two packets of the same product on the same grocery store shelf can have surprisingly different ingredients.  When you are cooking for someone with any allergy, read each packets ingredients list CAREFULLY.  In Canada, even the ingredients have ingredients list: flour, raisins, butter, all these things can hide allergens you wouldn't suspect.


Like I said earlier, I adore Japanese food.  Living without soy sauce was really getting me down, so I came up with a few substitutes.

Soy sauce does a lot more in Japanese cooking than just make things taste salty.  It kills bad bacteria, it prevents spoiling, it changes how things cook, it is basically magic sauce.

Here, because the internet is apparently useless in this area, are a few possible... 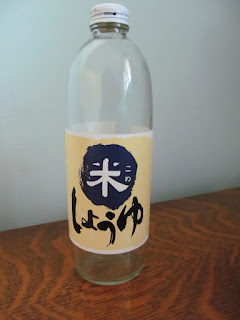 A few ideas I've been wanting to try:

Please let me know if you find this useful.


ETA Aug 2012 - wanted to share this link with you.  I haven't tried it yet, but probably will later this week if I have time.  It's the first half decent looking recipe for a home made soy-sub that I've found in quite a while.
Posted by TrampledbyGeese at 22:30